We've been going strong for more than 40 years. Even we think that's pretty amazing in such a competitive environment. We think our history may explain some of the reasons.

Stephen Lee, the founder of Audio Trends had his first contact with quality Hi-Fi while still a young boy. His father built his first speaker (mono) in the late 1950’s and soon added a second when stereo became more widely available. He was a true audio enthusiast.

The big-break came in 1963 when a Director in Myer Melbourne (Mr. Jack Johnston) recognised a talent and suggested that Stephen’s father apply for a job in the TV and Sound Department for the soon to open Northland store. As a qualified painter and decorator, he had no previous experience in sales! However, what he lacked in sales experience was more than compensated for with knowledge. 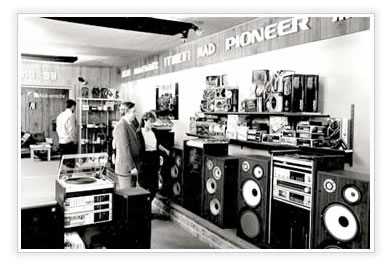 Stephen joined with his father in working during the school holidays of 1967, being one of the very few father and sons being permitted to work together anywhere in the organisation! Stephen had already decided to pursue his career goal of becoming a school teacher, but when in 1969 Myer offered a junior management course, he decided to give it a go. To this day, he feels that this type of education was very beneficial and has worked hard at teaching his younger members of staff the finer points of customer service.

However, Myer only offered limited opportunities in Electrical and could not in his opinion fully appreciate the scope available even then in the growing home entertainment market. There were no long-term plans, no long-term vision. So, in 1976 he joined with the vibrant and crazy team at John Bruce Discounts in St.Kilda. This store sold furniture and electrical goods. So, when John Bruce opened in the Wantirna Mall in 1976, it wasn’t long before Stephen requested a transfer as the store was less than a kilometre from his first home. Sadly though and not due to any fault of the store managers, John Bruce had to close, but reappeared some years later as Ken Bruce. You may remember the corny TV ads in the 1990's as Ken Bruce has gone mad where one of the owners (Bruce) dressed up in a straight jacket and another where he ran down Chapel Street Prahran in front of a tram! Although they appear to have been clowns, these guys were highly successful and taught Stephen real-world marketing and how to run your own business, because that was essentially what you did. 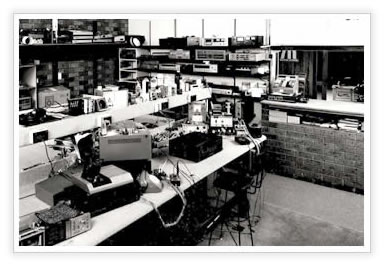 It was a very enjoyable period with some very unforgettable (some may say forgettable) characters! But as they say in the classics…one door closes and another opens! Stephen had built up a good relationship with a small speaker manufacturer in Bayswater and the owner, John Randall approached Stephen to run the store at 30 The Mall, Wantirna. It was December 1978. The location was lousy (no out-front parking), but the rent was cheap, and the enthusiasm was sky high. Early sales were OK, not brilliant, but encouraging. Wantirna was known as mortgage hill in those days, but the lines of locally made speakers and NAD 3020 amplifiers (now legendary) made for plenty of happy locals. There was one other employee – Fred Rayner. The original name was Budget Hi-Fi, but when Stephen Lee and Fred Rayner completely took over the business from John Randall in February 1980, they changed it to its present name Audio Trends – a name that reflected their goals in a lot better way. Fred Rayner left the business in 1983, his share being bought by Stephen’s parents.

The business consolidated during the next ten years and continued to grow slowly but steadily. Employees that worked over this period included Steven (Keith) Spurrier who is still working in the industry as a high-end consultant and Mark Schnabel. Mark Hales joined in 1987.

The Home Theatre market had its beginnings during this period and our enthusiasm and continuing ability to adjust quickly to new technologies placed us in a perfect position. By early 1995 we were finding it difficult to cope with demand but persevered until joined later in that year by Simon Lee.

Entry into the Custom Integration market came in 1997. This opened up a whole new world of excitement for both us and the customers and is one of the main reasons for the move to Ringwood in 2004. We had tried a number of times to expand in the Wantirna Mall, but could not get anything that would give us a long-term satisfactory solution. By September 2003, we had three separate places to store stock and empty boxes making for a logistics nightmare.

The present property in Ringwood, once an old factory has a 550 square metre ground floor area and off-street car parking. It has been completely remodelled inside and out by both ourselves and some of our trade partners. It has given us a perfect ‘canvas’ to fully demonstrate our manufacturing capabilities – we design and build dedicated Home Theatre rooms and purposely built audio visual furniture. In fact we could theoretically build your entire home as some of our renovations have been substantial. This "custom" business also includes multi-room audio and video system design, home automation as well as installation of all of the above and more. Naturally we have an "online" presence and this now operates as a separate entity to the main business. Audio Trends has always been different, and is still different offering a complete and refreshing alternative to the usual shopping experience. Give us a try, we know that you will like us!