Please Note: This product is a special order item which normally takes 8-10 weeks to arrive in our store, ready for pickup or despatch. Thank you for your patience and for shopping at Audio Trends.

AudioQuest don't just make high quality speaker cable, but also a range of matching connectors that can be used on most brands of quality cable with ease. By using AudioQuest Banana Plugs or Multi-Spades you are ensuring that your speaker wire is terminated in the best possible way. These Audioquest 500 Series connectors are one-piece solid high-purity purple copper instead of inferior sounding multiple pieces or brass. Especially pure "Hanging Gold" is directly-plated without the normal intermediary layer.

The 500 and more expensive 1000 Series of connectors began as part of a mandate to equal or exceed the performance of the previous AudioQuest WEL Signature Spade Lugs while also being ergonomically easier to use and, if possible, affordable for use on more models. At first glance, the AudioQuest Banana connector looks a lot like the cheap and dirty Radio Spares/Tandy parts from decades ago (and its many Asian copies) … but not only is the AudioQuest part made with a vastly better base material, including an ideal Cold-Weld screw-attachment system, but the "spring" on the side is pure copper rather than steel or any other inferior metal. And of course there's the Hanging plating. We are truly grateful to those folk who ages ago invented this mechanically-effective plug design, and we can thank Bill Low and his team who have created new versions which clearly put the lie to "ah, those things (banana plugs) sound terrible." Well, bananas did sound awful, but it's a new day! 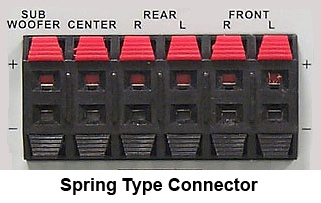 The 500 Series use the same parts as the more expensive 1000 Series, except that instead of using Red Copper, they use the same excellent Purple Copper as found in AudioQuest's middle-level RCA and XLR plugs. If you're asking, "gee, is that the only difference?" Yes! The slightly-reduced clarity and punch compared to the 1000's make the 500 Series totally killer high-value although not quite as good as the 1000 Series. Cost efficiency vs. performance … both series have that in spades! An AQ Multi-Tool is included with every package of Multi-Spades or Bananas. The Allen-wrench end allows secure tightening (Cold-Welding) of the electrical connection, while the Phillips-head end allows tightening the strain-relief screws.

Direct-Silver Vs Direct-Gold Plating: The plating is the same Hanging type as used for the previous AudioQuest WEL Sig. parts. This labour-intensive process requires that each part is attached to a hanger and dipped in a pure-silver or pure-gold bath, rather than conventional tumble plating. Not only does this provide a gorgeous finish (not usually a good thing as the standard way to get such a shiny finish is to first plate a nickel barrier layer under the silver or gold), but also the exact chemistry of the plating bath and the bonding of plating to underlying part can be more productively controlled … something you can hear. Over time you'll note that Hanging Silver is comparatively immune to turning black (though eventually cleaning with a silver polish cloth might become desirable). Hanging Silver versions are now considered standard and theremaybe a delay in receiving the gold-plated versions.

We just thought it would be a good idea to write a little about our experience with speaker cable and terminations which dates back to the mid 1960s as well as the reasons why connectors like Banana Plugs and Spade Terminals are no longer considered a luxury.

Of course, speaker wire or cable has been and will continue to be an important part of the audio video chain for the foreseeable future. You need speaker cable to connect between your Amplifier or A/V Home Theatre Receiver and your speakers. You can use bare wire, but this is the # 1 enemy to causing expensive damage to your Amplifier/Receiver. How so?

Up until the mid 1980's, most Amplifiers had a spring-clip connector and speaker cable was simple 18AWG to 24AWG (thin) stranded cable. It wasn't difficult to get it right although many did get it horribly wrong. Note: AWG stands for American Wire Gauge a USA standard for cable thickness.

We've seen plenty of people strip back even 50mm (should only be 8-12mm) of the insulation thus exposing lots of bare wire and danger! When the positive and negative "touch" disaster is only micro seconds away as well as a nasty burning smell from your precious Amplifier/Receiver!

As speaker cable came under the spotlight as a way of improving sound - Bill Low from AudioQuest was one of the first - and thicker cable was the first theory, a better way had to be found for connecting this thicker speaker cable. The first idea was thin brass pins that were crimped to the cable, and although an improvement, were tricky and often popped out of the spring connector - voice of experience here!

Spade Connectors: These had been around for many years in the electronics world and so the "smarties" among us started using these, particularly at the speaker end which often had thumb screws. However, these still only suited thin cable. So, not long after the brass pins came to market, so did some decent Spade Connectors.

Banana Plugs: Can only presume that somewhere in the electronics world many moons ago, someone decided to make a smaller version of the standard 'phone' or headphone jack. Size is 1/4" or 6.35mm. Today, even entry-level Amplifiers/Receivers have provision for Banana (4mm) plugs and although Spade Connectors and Banana Plugs are still optional - yes bare-wire is also still a choice you have - quality connectors are chosen by most of our customers because (1) they keep everything a lot tidier; (2) are easier to remove and relocate on equipment that needs to be moved and (3) of course minimise the risk of damage to your expensive electronics. They also have one other benefit. Both Spade Connectors and Banana Plugs have a larger surface area than bare-wire alone and so more of the 'electronic' signal passes from Amplifier to Speaker.

Note: Please don't conclude that all Banana Plugs are equal! There is an abundance of absolute rubbish and junk on the Internet. The 'external' springs loose tension in no time thus defeating one of the primary advantages of buying plugs in the first place. Sure, they're only $2.50 each, look like the real deal with Gold plating etc but you are wasting your money.

Our Take On The 500 Banana Plugs

These AudioQuest 500 Series Banana Plug Connectors can be used to terminate your speaker cable with ease and do not require the use of any special tools - just wire-strippers and the supplied tool and you're done. They're designed to work with all quality and huge 7 AWG speaker cables although we personally wouldn't recommend them with solid-core cable. You will need two sets (12) if you wish to bi-wire your stereo amplifier and speakers that have separate terminals for low and high frequencies.